A Handful of Cuts sees each player taking the roles of assassins and plotting to slowly kill their fellow assassins in a death by a thousand cuts, or in this case A Handful of Cuts. Lie, steal, cheat and constantly think outside of the box to get the best of your fellow friends and enemies to take their blood cards and be the last alive.

A Handful of Cuts is a hidden mission table-less game. Each player starts by drawing three mission cards. These could range from coercing a player into doing the most mundane of tasks for you to pulling off complicated schemes with the help of other players. Each successful mission allows you to steal blood from that player. If all but one player has run out of blood cards the game ends and that player wins. It can be played anywhere and over any length of time.

Setup
Deal every player five blood cards and a bag. Shuffle the mission cards and have each player draw three. Place the remaining mission cards and the box in a place where all the players can access them. The bag is used to hold cards.

How To Play
Each player has three secret missions, their goal is to complete these missions by any means necessary. Every time a player completes a mission the player who was the target gives the assassin the number of blood tokens shown on the mission card.

Ways to win
Last Man Standing: It's as simple as it sounds. Play until the bitter end. Last player with blood cards left wins. This mode is recommended for groups of three or less.

Time's Up: If you're playing at a party or another social event then set the end of the game when the event ends. Before everyone grabs their coats and hits the road have everyone count their blood cards. The player with the most blood wins.

In the case of a tie the tied players share their most creative execution of a mission and have the remaining players decide which was better. Most creative cut wins.

For extra fun in games of three or more the skull is worn by the current score leader. It lets them show their pride and lets everyone else know who has the most to lose.

Want to submit feedback without hurting my feelings? You can do that here It's as anonymous as Google will allow. They'll probably know who you are but I won't.

Want to see some old assets I never ended up using? They look terrible: Link

Support this table-less game at or above a special price point to receive something exclusive.

Will ship within three business days. US shipping only currently.

I'll follow up by e-mail to confirm shipping info.

It's totally a prototype copy. 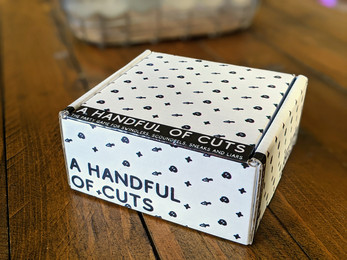 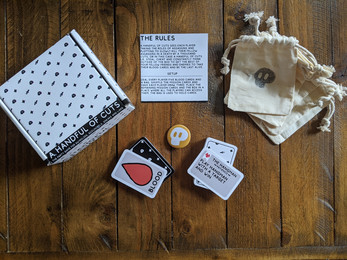 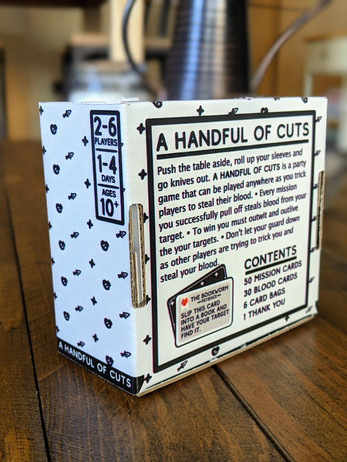 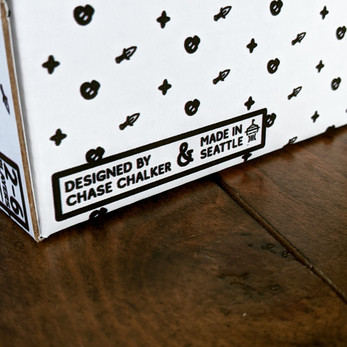